I don’t like typing “nautilus” to open the folder explorer from the terminal. Mac’s “open” command is shorter and makes sense to me. To get the same command in Ubuntu, we just have to add it to bash aliases.

Open up ~/.bash_aliases to be edited. I usually use nano.

When using the terminal, to open nautilus in the current folder, you can run this command

The “&” detaches the process from the terminal and is optional.

Reflecting back, the only time I’ve ever done something right the first time is when it wasn’t my first time doing it.

As a contractor, I encounter eerily similar situations at most places I involve myself with. Even businesses not in the same industry. Most businesses are trying to solve similar problems across multiple domains with slight variances. This is exactly the reason learning design patterns is a good investment of your time.

If I’ve ever come into a new project and nailed it on the first try, it’s only because I recognized the similarities from a previous project, employed the things that worked, and avoided the things that didn’t.

From the perspective of full time employees, it’s a challenge to be allowed to fail a few times at one employer. A contractor can have a few “challenging” gigs and then stumble upon the perfect redemption project for a win. A full timer would have to get a rare blessing from above to rewrite something for the third time.

Build something small and scale it

I had an issue that came about suddenly while working.  Every now and then my cursor would jump to the upper right corner and lock to the taskbar.  I couldn’t find any pattern to explain it.  I tried:

The issue persisted.  I noticed that my touchscreen wasn’t responding, so as a last step, I tried temporarily deactivating my touchscreen.  The problem then went away.  After a reboot, my touchscreen worked properly and the cursor no longer jumped.  I have no explanation as to why, but here is how:

That will give you a list of inputs with IDs. The touchscreen entry should be pretty obvious. Mine is ‘Synaptics Large Touch Screen’. Note the ID. It should be a single or two digit number.

I do this just about every time. I don’t allocate enough drive space that my virtualbox will need. Here’s how I fixed it this time.

I have a windows development box that I allocated 40gb to as a dynamic virtual disk. I chose the “.vmdk” format, which isn’t so straight forward to expand. Had I chosen VDI or VHD, I could have used the “VBoxManage modifyhd” command, but that was a no go. I ended up with this error:

What Did Work?
I created a new virtual disk (dynamic) at the size I wanted – 80gb. This time I chose VDI. Then I ran:

After that completed successfully, I went back into the settings of my windows.dev virtualbox, removed the old hard drive, and changed the new one to SATA Port 0 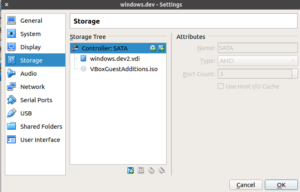 I could then boot up to windows. The last step was to go into “Disk Management”, right click on the partitioned part of the drive, and select “Extend Volume” to add all the new space. 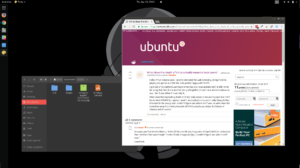 I’m a chrome user, so this works out really for me. The easiest way to install gnome extensions is through a chrome extension. If you have that, head over to https://extensions.gnome.org/ to get more extensions.

To manage these extensions – turn them on and off, or change options if they have any – use Gnome Tweak Tool. If you don’t have it, get it with this command:

If you are starting fresh, the way to go is to install Ubuntu-Gnome. Ubuntu and Ubuntu-Gnome will be merging anyway. Get that here.

If you are like me – using my ubuntu machine daily and super impatient – you can just install gnome and switch to it from the login screen.

You will be prompted at this point to choose between GDM and LightDM. I chose GDM at first, which I read was fine if Gnome was going to be used solely (sharks don’t look back!). I understood that LightDM is the option to choose if you are going to flip between the two. GDM caused me some graphic driver issues that left me unable to boot. I ended up in recovery and ran the above again, this time choosing LightDM. All good after that.

To get the better looking gnome login screen, run:

Then when I have a site that requires being passed to a proxy, the location looks like this:

I’ve been slumming it with Intel integrated graphics only on my M3800.  It works fine, and the battery life is good, but knowing I had a graphics card in this machine that wasn’t being used didn’t sit well with me.  Previous attempts to install drivers and switchers led to black screens and frustration.  I saw on reddit today that ‘Prime Indicator Plus’ is a thing.  It worked without a hitch.

I installed Prime Indicator Plus while running on Intel graphics.

I logged out and back in I was greeted with a red exclamation icon.  This was because in additional drivers it showed me using the X.Org X server – Nouveau display driver.  I couldn’t switch away from the Intel driver using that.

I changed to use the NVIDIA binary driver – version 367.57 from nvidia-367.  Previously, selecting this driver and logging out led to a black screen.  I tried it again, logged out and back in, and I’m now using the battery draining power of NVidia!  I see the NVidia logo when using the NVidia card, and the Intel logo when using the integrated video.

I added this repo: sudo apt-add-repository ppa:xorg-edgers/ppa.  I’m not sure if I needed to, but I figured I’d note that.  I think the nvidia-367 was there before I added it.

I tried out a bunch of icon packs on Ubuntu 16.10.  Eventually, my terminal icon was a question mark no matter what icon pack I applied.  I realized somewhere along the way, I broke it.  I found a bunch of suggested fixes.  This is the one that worked for me:

… And it’s worthless on it’s own…unless you love typing.

To install Ubuntu Bash on Windows, first make sure you have the anniversary update for Windows 10. To check, search for “About your PC”. You should be at Version 1607 or better. If that’s all good, go to “Programs and Features”, click “Turn Windows features on or off”, and check “Windows Subsystems for Linux (Beta)”.

After it does it’s thing, search for “Bash on Ubuntu on Windows”. The first time it pops open it will ask you to install it. Do that. It will require a reboot.

Using Ubuntu Bash in CMDer is a much better experience. To do that, click the arrow next to the green plus sign in CMDer and choose “Setup Tasks”. Create a new task with this information: 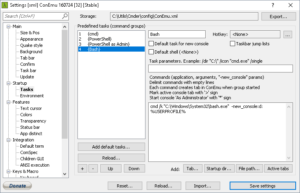 You can then choose Bash when you open a new console and enjoy copy/pasting.