The article I will be referencing:
Huffington Post Takes A Piss On Diesels

Huffington Post incited (rage-induced) enthusiasm today. For that, I thank them. The lead picture also gave me a pretty good chuckle. Thanks for that, too. 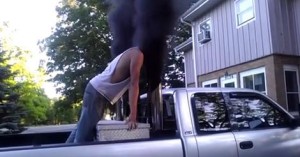 I can start with the obvious: this isn’t an anti-environmental group agenda and it has NOTHING to do with Obama. Sure, there are jerks that smoke screen people (I have personally had “coal rolled” upon me). I put this in to the same category as having my house egged, TP’d, or graffiti’d. It’s unwanted, unwarranted behavior that should have consequences. If that was the slant of the article, this blog post wouldn’t exist.

The environmental issue
Yes, fossil fuels take carbon from far below the earth’s surface and throw it into the air we breath. This is a consequence of our reliance on combustion engines of all kinds. Did you know that the Rudolph Diesel’s first diesel engine ran on peanut oil? In fact, the aim of the engine was to allow farmers to grow their own fuel. It wasn’t until later that fossil fuels were used to power these engines and get Rudolph’s name offensively slapped onto the product.

Diesel engines carry just about everything you buy from the source to the shelves. Diesels are used because they have more torque (ability to pull heavier loads) and operate more efficiently than spark ignition engines (the kind that use gasoline). Most of the rest of the world prefers this engine due to the fuel economy and fuel flexibility they offer.

The debate rages on about whether gasoline engines or diesel engines are worse for the environment. Speaking in terms of the United States, gas engines have far greater numbers, get worse fuel economy when compared to their diesel counterparts, and are used frequently to carry light loads (a person or two) very short distances. Diesel engines distribute more particulate matter (soot), but get better fuel economy and are used to carry heavy loads long distances. Ultimately, both engines are burning what was once crude oil.

Why is this even happening?
Mechanics (hobbyists and professionals, alike) have been modifying pickups for generations. These trial and error modifications have lead to advances in power and fuel economy that winds up in stock production models. More power means more efficiency when power is needed. A handful of idiots abusing this power does not an anti-environmentalist group make.

I will attempt to explain black smoke and diesel exhaust. The article was correct in stating that too much fuel in the chamber leads to partially burnt fuel exiting the tailpipe. To achieve power in a compression ignition engine, the main variable to play with is the amount of fuel injected into the combustion chamber at each compression stroke. Eventually, you reach a tipping point where more fuel is being injected than can be thoroughly burned. Simply put, you get a lot of power at the expense of excess fuel use.

My thoughts
This is an example of sensationalism. How social media can be used to whip people into a frenzy. I think it’s a fair assumption that a writer at Huff Post was a victim of a cloud of exhaust. They then set their pen (keystrokes) against their attacker. The outcome is an uninformed witch hunt against the vehicles that get work done and their performance modified cousins.

It all comes down to knowing what you don’t know. I have a very limited scope of knowledge. I just so happen to stumble on an example that I do have education and experience in. This enabled me to read between the lines and see the truth from the exaggerations and spin. How many other instances are there were I fall into the sensationalist trap and get riled up over spin? I’ll be sure to watch out for that.